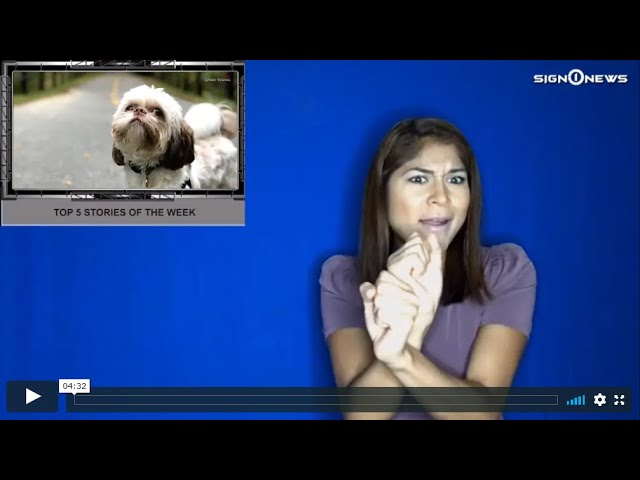 Here’s a quick recap of the top 5 uplifting, funny and inspirational stories of the week you may have missed.

As usual the animal kingdom is giving us a reason to smile.

Check out this hilarious video of a slippery Shih Tzu named Astro.

After his owner was involved in a crash on a Washington DC Expressway, Astro got loose and proceeded to bob and weave in traffic as firefighters and other motorists tried to nab him.

In one heart stopping moment he ran under a moving vehicle but then safely emerged.

After a seven minute marathon puppy pursuit, Astro veered into some bushes and was finally caught.

A new underwater hotel suite is perfect for animal lovers.

It’s now offering this underwater room called ‘The Walrus House’ because it has a direct view of the zoo’s walrus tank.

And it’s not as expensive as you might think.

Prices start at about $150 per person per night.

A woman in Fort Valley, Virginia snapped this adorable picture of a huge black bear sleeping in her children’s kiddie pool to beat the heat.

She says the bear first dipped his paw into the pool then jumped in and splashed around for a few minutes then fell asleep and dozed for about an hour.

It was the sound of her grandkids and their dogs that eventually scared it away.

She’s the first female to coach on the field during a Major League baseball game.

She entered during the late innings to coach first base for the San Francisco Giants in their exhibition game against the Oakland A’s on Monday.

Nakken is also the first female coach on staff in league history.

And finally by now you may have spotted the visible comet Neowise in the evening sky.

It can be tricky.

One couple not only witnessed the comet, it photobombed their proposal!

John Nicotera’s original plans to propose to his girlfriend Erica got sidelined by coronavirus.

So the self-proclaimed space junkie called a photographer buddy of his and made the once-in-a-lifetime celestial event the backdrop for his proposal.

Nicotera then posted the photos on social media where they quickly went viral.

In no time flat the pictures were being shared by everyone from the Weather Channel to astronauts on the ISS.